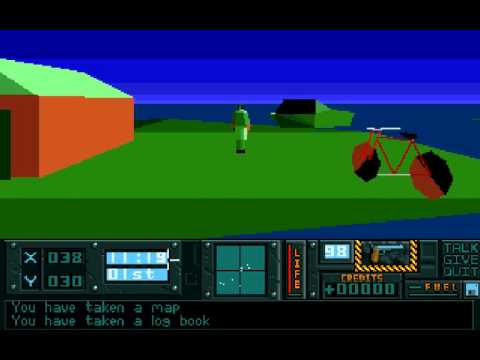 Hunter is apparently one of the first serious attempts at a 3D game beyond the usual vector style graphics of the time. It’s also one of the first sandbox games, with surprising freedom in your choices of how to execute the missions you’re given.

There are tons of vehicles and weapons for you to use. The user interface is easy to use and comprehensible. The firing of the weapons is a bit difficult since your character can only face in 8 directions, but turnable vehicles with weapons make this easier. I’ve barely scratched the surface in this video and I’ll probably play it quite a bit more, maybe on video if it seems like it will be entertaining.

This was a request by slenkar on my 64 subscriber special request video.

“Overlooked Oldies” is a series of let’s play videos of retro games that I somehow never played back in the day. Many of them will be suggestions made by subscribers, particularly on binary milestone request videos.

Intro music is from the classic “cracktro” by SCoopex. The full version can be heard and seen here: