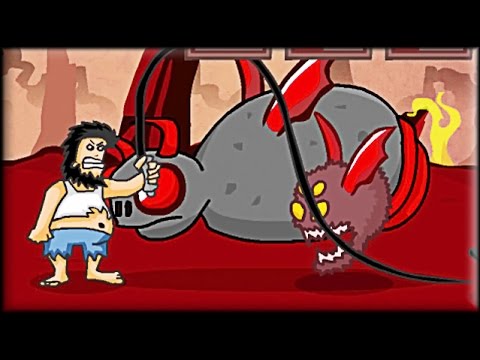 The crazy and wacky Hobo has been sent to hell for his bad activities. And looks like he’s going to ruin even the demons here in Hobo 6! Unleash your anger and defeat the demons running around hell. Use your punches and kicks to attack them. You can also grab giant boulders and throw this at them. If you continue using attacks, you will be able to use funny attacks as well. Be sure to defeat all the enemies so you can process on the next area. There are also special combos that can be used quickly when you achieve them in the game.

Our favorite Hobo is back for a sixth game. In the last game he had to survive in a UFO from a lot of aliens. He fell asleep on the UFO after the grueling battle, ran out of oxygen and died in the process. Since Hobo died, he went directly to hell where he is still asleep. A devil wakes him by punching him and welcomes him to hell. Apparently Hobo doesn’t like being in hell or just being disturbed while sleeping. This is why he goes on a rampage to fight the legions of devils and the other sinners in hell.

The game’s visuals are the same as the previous games. The visuals are hand drawn representing a comical version of cartoons. It’s an art style that shouldn’t be taken too seriously but all is good. The animations do work well and despite being in hell, it is bright and colorful. There are parts of the game especially the levels are a bit gory. There are people impaled on spikes as well as people getting nailed on inverted crosses. The game is a bit gory but if you can handle it then that’s fine. The music is still the same as the previous games having that jazzy tune to it despite beating up a dozen of devils. There is another music that plays from time to time but it’s all good.

Hobo 6 is the same as the first five games. It is a beat em up game mixed with fighting elements. Players can control Hobo with the directional arrows to move on the level. Pressing A allows Hobo to punch, pressing S allows him to do other things. During the start of the game, Hobo has access to a variety of combos. Defeating certain enemies and doing the story will allow him to learn and unlock more combos along the way. The enemy lineup consists of regular devils, devils that whip, devils that breathe fire as well as demons. Then you also have the regular people that have died and gone to hell of course. While the game is fun, it can be really hard. One thing is that you don’t get any life replenishing items along the stages. You better watch out for those devils with whips since they can whip you at a relentless pace. If you do die, then you start from the last checkpoint which is sadly by inputting a password. When you do reach a checkpoint you get the password. Just input the password when you would to start off there. If you don’t have a password then you start from the beginning. Then again you can always look up the passwords online if it’s really hard. It’s not an easy to game to say the least but the challenge aspect is always good. The final battle against Satan is very intense but Hobo manages to defeat him. Apparently after he defeats Satan, he ends up in heaven sparking his new journey.