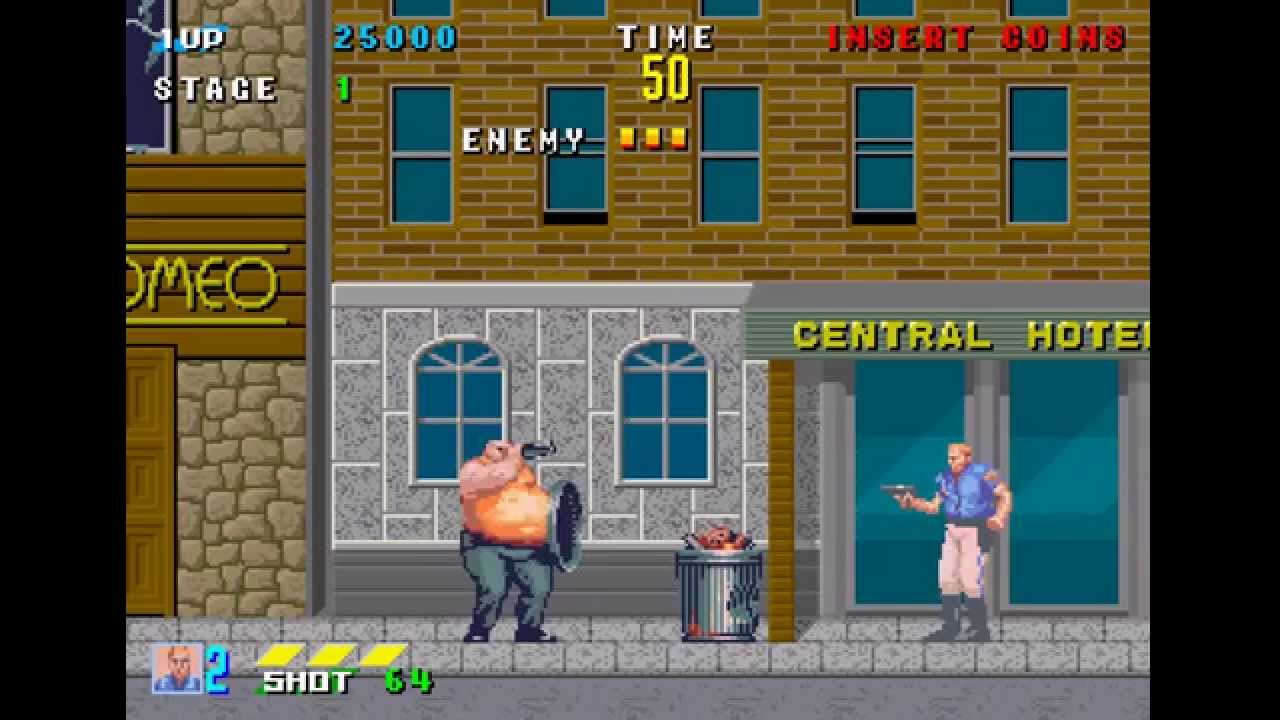 Following my recent longplay of the the C64 version of ESWAT ( and found it somewhat lacking, I wanted to play the original arcade game to refresh both my memory of the game and to put the C64 into context.

I played ESWAT in the arcade only once, but I remember that it’s the only coin-op that I bothered to buy additional credits for following defeat. For some reason, the game clicked with me and I was curious to see if that was still the case today.

The game feels rather like Shinobi, but with less ninja and more guns. The style of gamplay is very similar in that you must run and gun down multiple enemies, as well as move between the top and bottom play-fields.

I still think that the decision to have the player progress through the ranks before being promoted to ESWAT is a cool idea. An arcade is no place to present the player with lengthy explanations regarding gameplay elements, so the opening screen showing the rank progression through to earning the ESWAT suit is nicely done. I suppose it’s also a deliberate ploy to get punters to spend more money by making them play through three levels before they even get to the good stuff!

The ESWAT mech-suit is equipped with a fully automatic chaingun that allows the player to hold down the fire button for sustained fire. Whilst you might think that this gives you an advantage, it’s more of a necessity since the number of enemies increases and most of these are armed with guns, attack more often or take multiple hits to kill. The chaingun can be bolstered with one of three different super-weapons that are designed for clearing the screen of enemies when the going gets tough. These weapons don’t appear often and must be caught as they fly across the screen, so it’s likely that you will lose out if one appears in the midst of a hectic gun battle.

Perhaps the biggest challenge in the game is conserving ammunition. Bullets are limited and certain enemies require multiple hits to down, so you need to collect the bullet boxes that occasionally appear on each level. Running out of ammo will limit you to a close-range melee attack, which puts you at greater risk of getting shot by enemies. Running out of ammo is less of an issue as a regular cop as your handgun files a single round, but the ESWAT suit’s chaingun fires in a minimum of three-round bursts, so it’s extremely easy to run out of ammunition.

The in-game graphics are pretty good. The sprites are nicely animated, especially the main police officer who has enough frames is his walking cycle to make it look realistic and not as though he’s ice-skating. The ESWAT suit breaks apart and bits fall off as it takes damage, which is a really nice touch.

Most importantly, the controls are responsive and the sprite collision is excellent. The C64 version was plagued with hit-box problems that made avoiding bullets impossible, but none that exists here. In fact, the arcade version of ESWAT is arguably easier than the C64 version purely because it works correctly!

As with other games released during this period, the game uses an increasing number of digital sound effects and speech samples. The music is also quite catchy, although it still sounds quite poor when compared to some of Capcom and Konami’s games from the same era.

ESWAT is another solid title from Sega. I don’t think it’s as memorable as Shinobi or Golden Axe, but it’s a fun and challenging title that is definitely worth sinking a few coins in the slow.