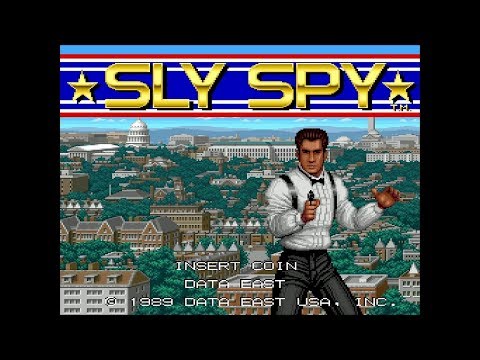 Sly Spy is a 1989 arcade release by Data East, and is also known as “Secret Agent” in Japan and “Sly Spy: The Secret Agent” in Europe. When Galloping Ghost Arcade added this game to the floor earlier this week, I knew I was going to love playing it.

The game has many James Bond references and characters, such as the stage 2 boss (Jaws from “The Spy Who Loved Me”), and the third boss is clearly Oddjob (from “Goldfinger”). What other references can you spot?

Data East obviously recycled character sprites from some other Data East games – Oddjob is Karnov’s Bad Dudes sprite with a suit and hat, for example.

The gameplay is very straightforward and easy to pick up. A common mistake by new players is to go in, guns blazing. In this game, you definitely have to take your time clearing the screen of enemies before bringing more out by scrolling or you’ll be quickly overwhelmed.

One thing I really like about the game is that you don’t lose health by running into enemies, similar to Shinobi. You instead go into a stun animation, and have a brief moment of invulnerability. Using those precious moments to pass though other enemies or bullets will greatly help you 1 credit clear this game.

Sly Spy is not particularly hard and pretty short (15-20 minutes), and I definitely recommend checking it out.

Recorded with wolfmame .196 using default settings, “slyspy3” romset used which is the US version. As with all my runs – no TAS (tool assistance), cheats, hacks or save states are used.